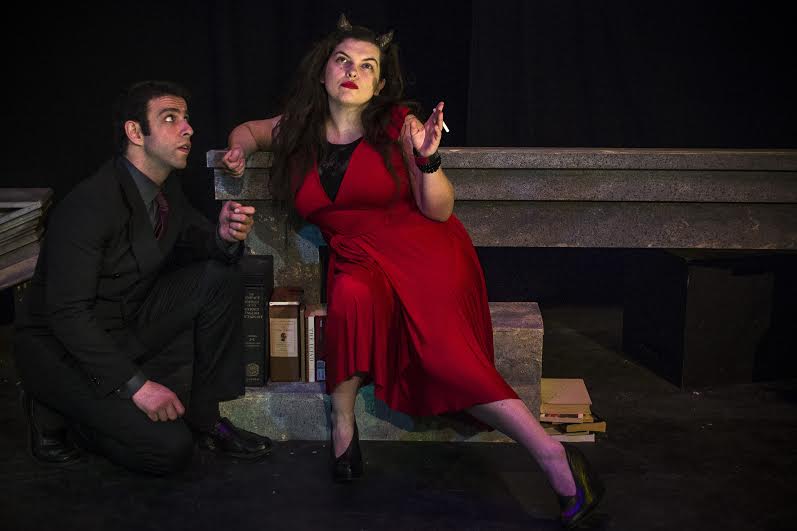 Recently
I had the opportunity to attend the very last production of Vile Passeist’s Doctor Faustus
at The Bus Stop Theatre. Having been familiar with the work of Rhys Bevan-John and
Dan Bray I was more than excited to see what they had to offer.

The
play is dark, and sinister in plot, as Dr. Faustus, a well know German
scholar decides that he wants to trade his soul to the devil to learn
how to practice magic.  Despite warnings, the arrogant Faustus trudges fully into the world of Lucifer,
and offers up his soul in exchange for twenty-four years of service
from a demon named Mephastophilis. As you can well imagine this is a bad
idea from the start; the play isn’t called “The Tragical History of the Life and Death of Doctor Faustus” for no reason.

“No Elizabethan play outside the Shakespeare canon has raised more controversy than Doctor Faustus. There is no agreement concerning the nature of the text and the date of composition… and the centrality of the Faust legend in the history of the Western world precludes any definitive agreement on the interpretation of the play…”*


I
am always impressed with what Halifax theatre companies can do with
their limited space. The Bus Stop Theatre is certainly not grand by any
stretch of the imagination, but Vile Passeist  did extraordinarily well to utilize costumes and the space to their advantage.  The
many variations of masks worn by the actors were absolutely beautiful!
The time and effort that must have gone into creating these pieces for
the play is definitely commendable.  I’m also terrible
about figuring out lighting whenever I am putting together dance shows,
and so I have a deep appreciation when it is done well! Great work Mathew Downey.
Unlike
other critics I actually appreciated the humor that was injected into
the play. I always seem to gravitate towards darker plots, and I’ve enjoyed my fair share of Gothic literature through my university degrees. But I think all successful tragedies need comedic
relief, and I think Vile Passeist did well to create clever breaks in
intensity.
The lead, Staring Pasha Ebrahimi playing Dr. Faustus had the perfect voice and intensity for this role.  I would have liked to see a more authentic side to his more humorous lines however. Which brings me to my next point.
My
only real criticism of this play would be that I wished that the other actors emoted
a little better. Given that the language is a little archaic it’s so SO
important that the actors use their emotions and acting skills to convey what
is happening; otherwise I find the message can get lost in the 16th century language.  To be completely fair I did see the the very last showing of the play, so maybe after performing their little acting hearts out all weekend maybe they just didn’t have it in them! I wonder had I been able to make it to the opening night if I’d feel differently.
Overall I really did enjoy the whole experience, and I can’t wait to see what they do next!  Make sure to check out Gallathea in November 2014 at the Bus Stop Theatre!
Thanks for reading!
xx Short Presents
*Logan and Smith, p. 14
BuzzPeople I've MetReviewsTravel
0 Comments
Share