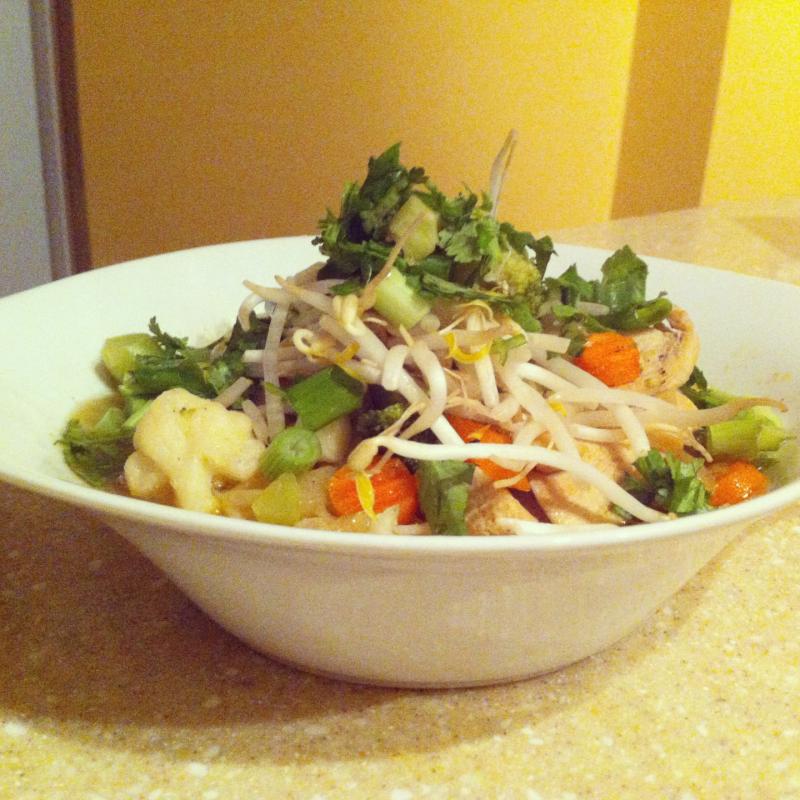 You know that commercial for Campbell’s Chucky Soup that says that it’s “soup that eats like a meal” well today’s recipe takes on that exact same challenge! With plenty of protein packed chicken and gluten free rice noodles and copious amounts of veggies this soup is definitely substantial enough to be eaten as a meal in its own right.

Similar to a Pho Soup this recipe calls for fresh cilantro, green onions, rice noodles, and bean sprouts, but because I couldn’t find star anise at my local grocery store I have a difficult time calling this recipe Pho Soup. So we’re going to call it Chicken and Rice Noodle Soup. 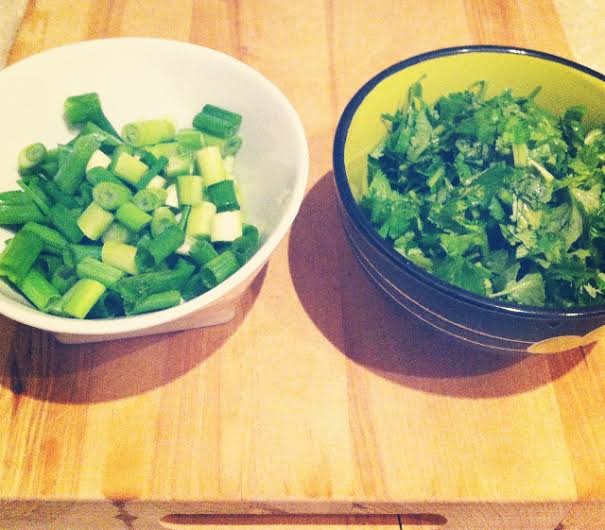 A couple weeks ago I was miserable with a head cold, and I just felt really run down and general. Whenever I’m filling kind of crappy I always go for a bowl of pho soup and it always makes me feel better, and so I attempted to recreate this wonder of a recipe at home. I have to say it wasn’t exactly restaurant quality, but I think that’s because I didn’t have all the ingredients. It’s still worth a blog reader especially if you can track down some star anise.


Prepare the rice noodles as per instructions on the label. I use the blue
package and it usually takes about 6 minutes to cook them. Once they are cooked
I drain them and leave them in the strainer while I prepare everything else.
You can leave them like this for quite some time just simply run warm water
over them later when you’re ready to use them. Or you can also toss them in olive oil and cover to use at another time. Either method works.

Meanwhile, place a large pot over high heat. Season the chicken with salt and
pepper to tenderize it. Sear the chicken until charred on the outside, about
2-4 minutes per side. Next add the onion and ginger to the pot; cook about 4
minutes. Add the broth, 3 cups water, the star anise (if you have it) and cinnamon, reduce the
heat and simmer about 20 minutes.

Meanwhile, thinly slice the scallions and jalapenos (remove seeds for less heat)
and tear the cilantro.  I didn’t want to
mess with peppers and so I just used cayenne pepper and paprika to add heat.

Add the fish sauce to the broth and boil 5 minutes. Discard the ginger, star
anise and cinnamon stick. Remove and slice the onion. This is where I added the frozen veggies because I don’t like them to be too soggy. I let them cook in the broth for about 5 minutes. Divide the noodles among
4 bowls; top with the broth, chicken, scallions, cilantro, bean sprouts,
jalapenos (is using) and onion.
Recipe adapted from:
http://www.foodnetwork.com/recipes/food-network-kitchens/vietnamese-noodle-soup-recipe/index.html?oc=linkback
Happy Tuesday Blog Reader!
Sincerely,
Short Presents
FoodFood and NutritionHealth and Wellness
1 Comment
Share

THE IMPORTANCE OF KINDNESS IN THE DIGITAL WORLD RECAP VIDEO