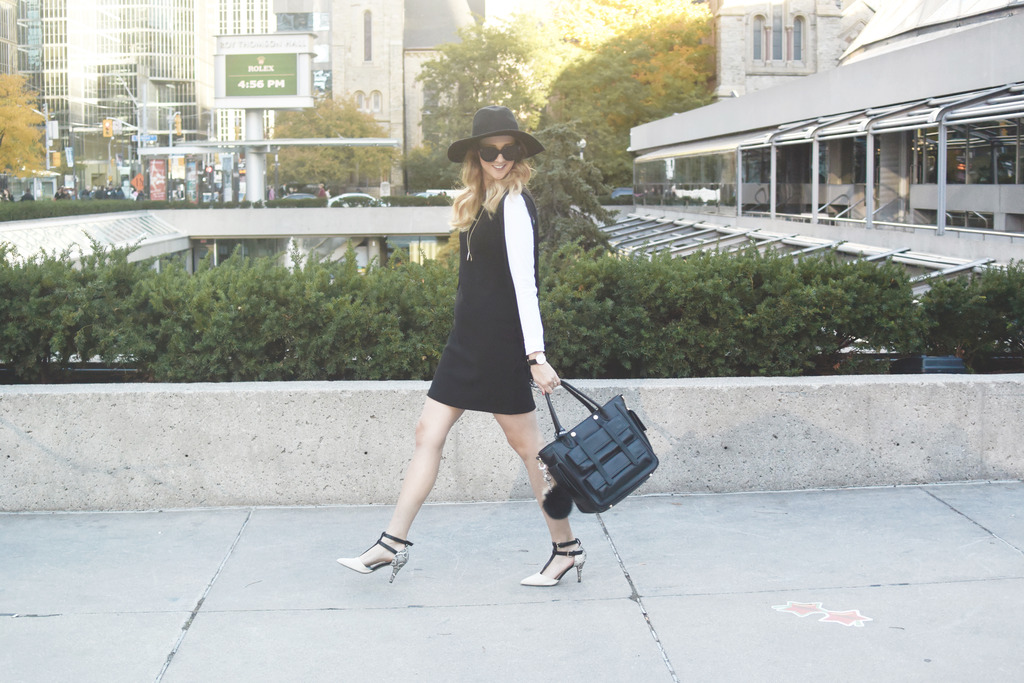 This look was a show stopper to say the least. Still staying true to my
classic look this sleeveless little black dress with its fringe
detailing appealed to the bold, and the timid all at the same time. With
just a little bit of a drama the fringe situation on this dress was
just oh so fun to wear. 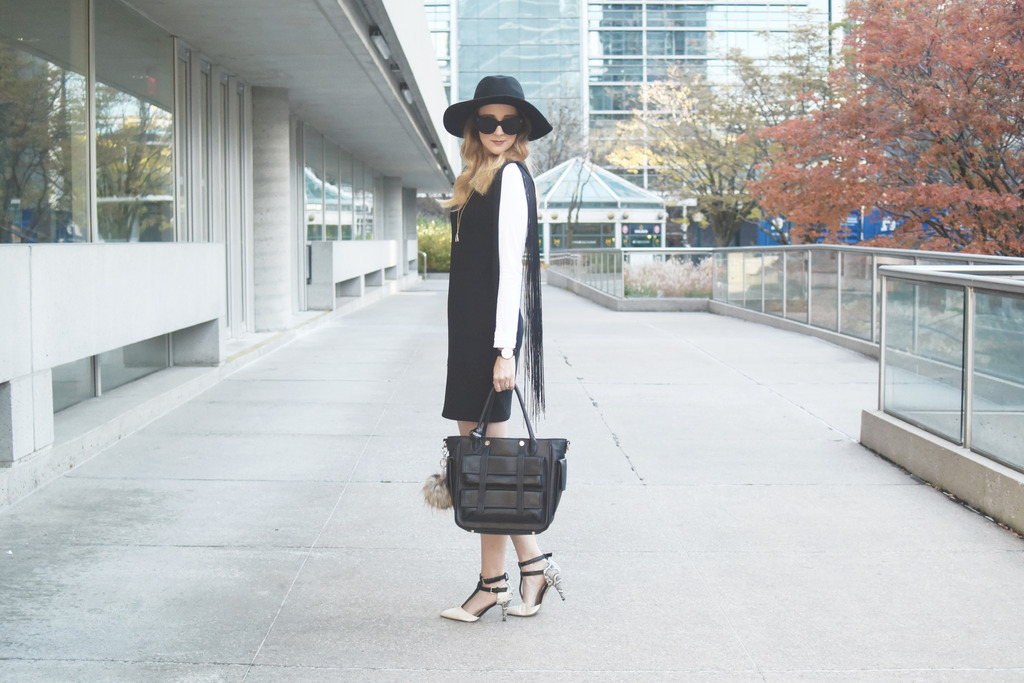 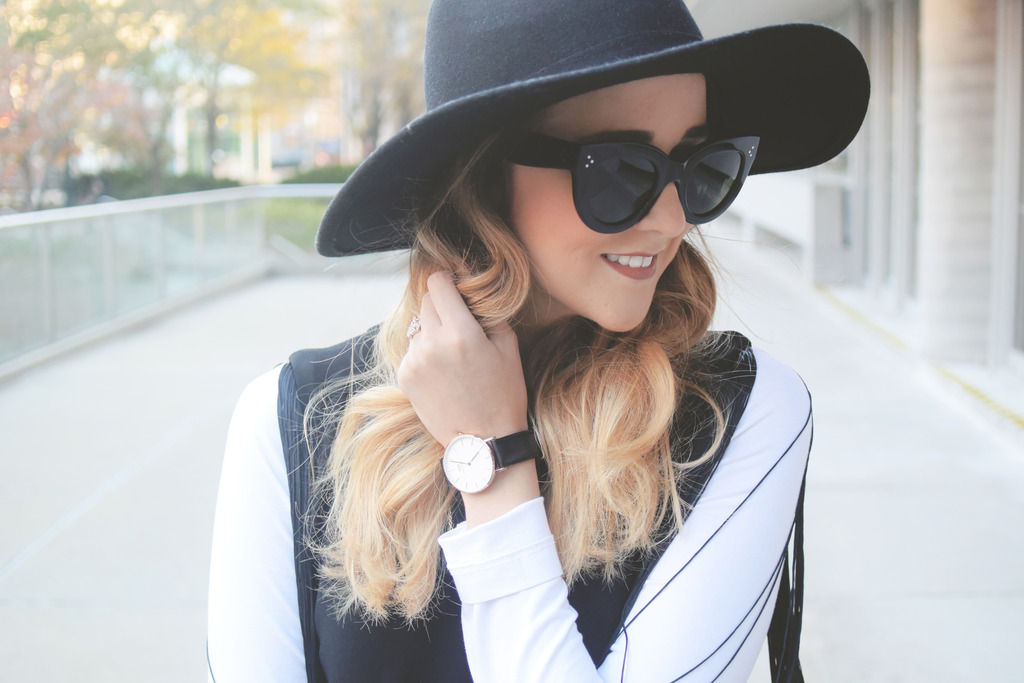 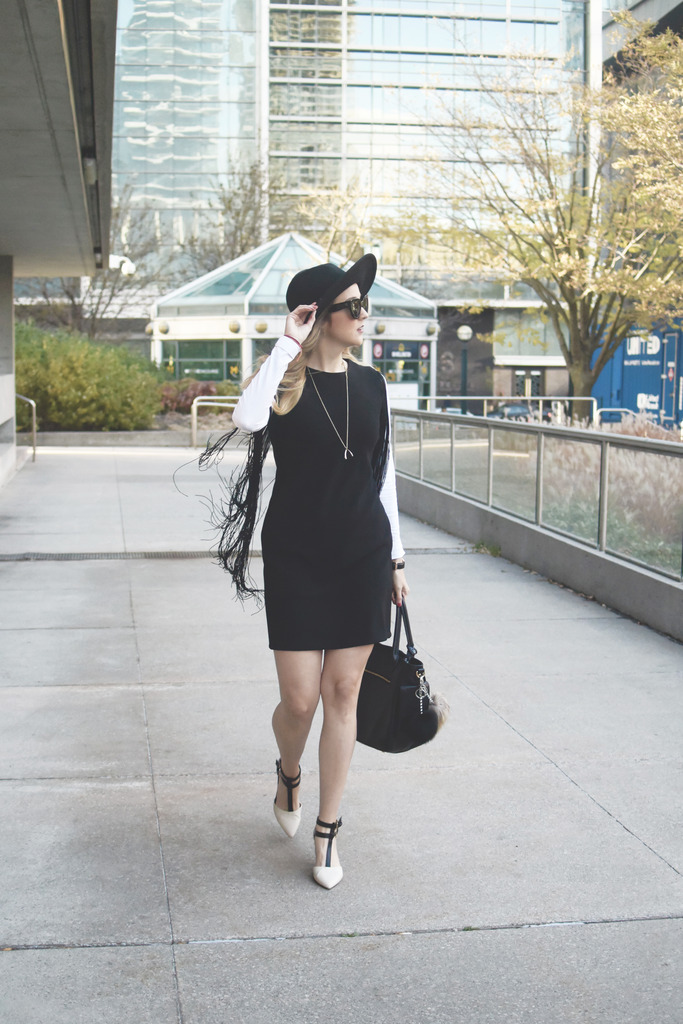 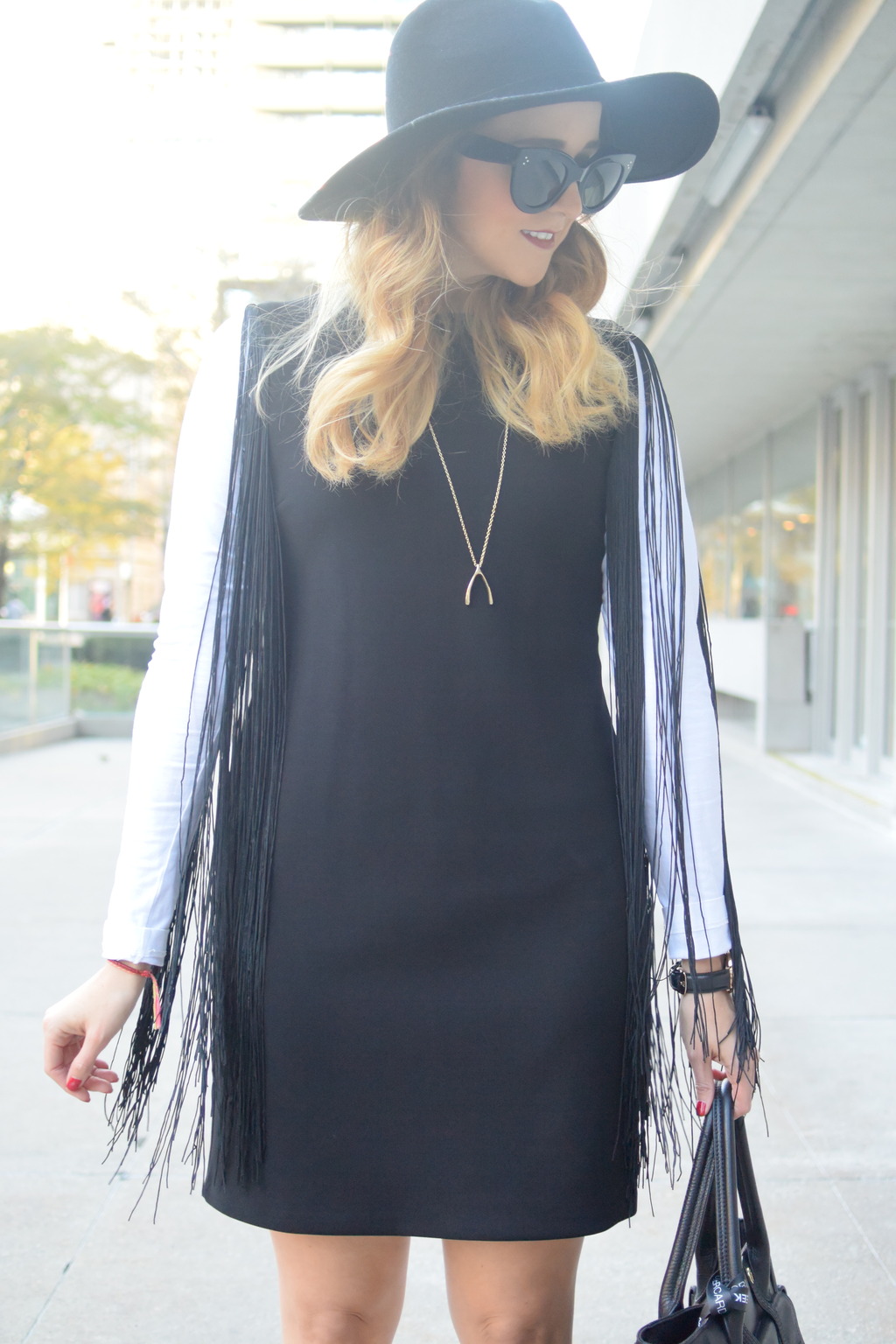 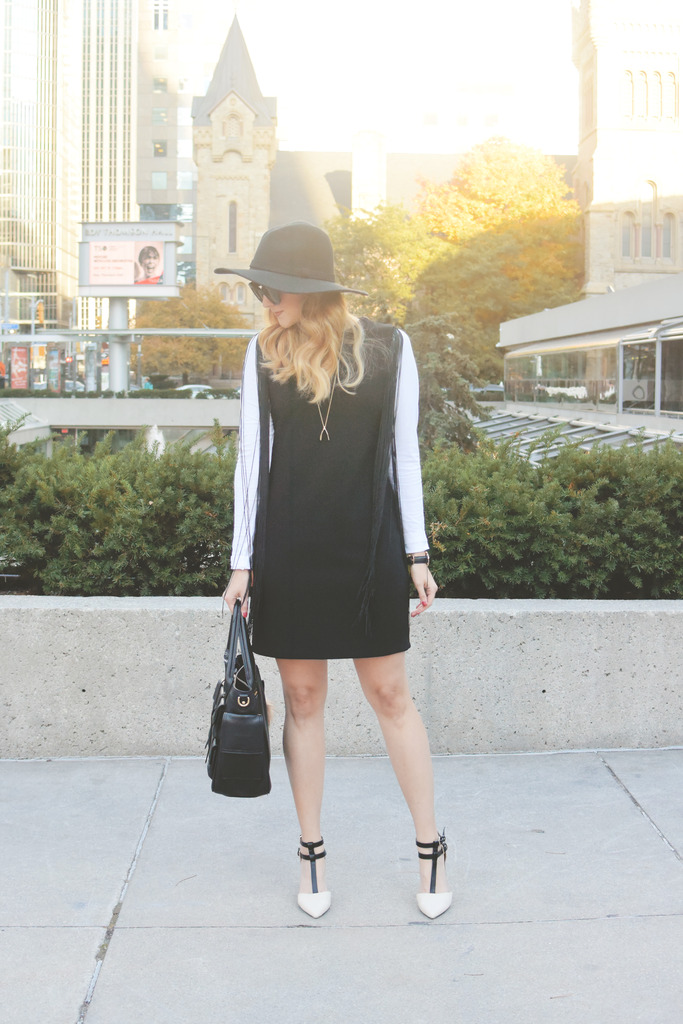 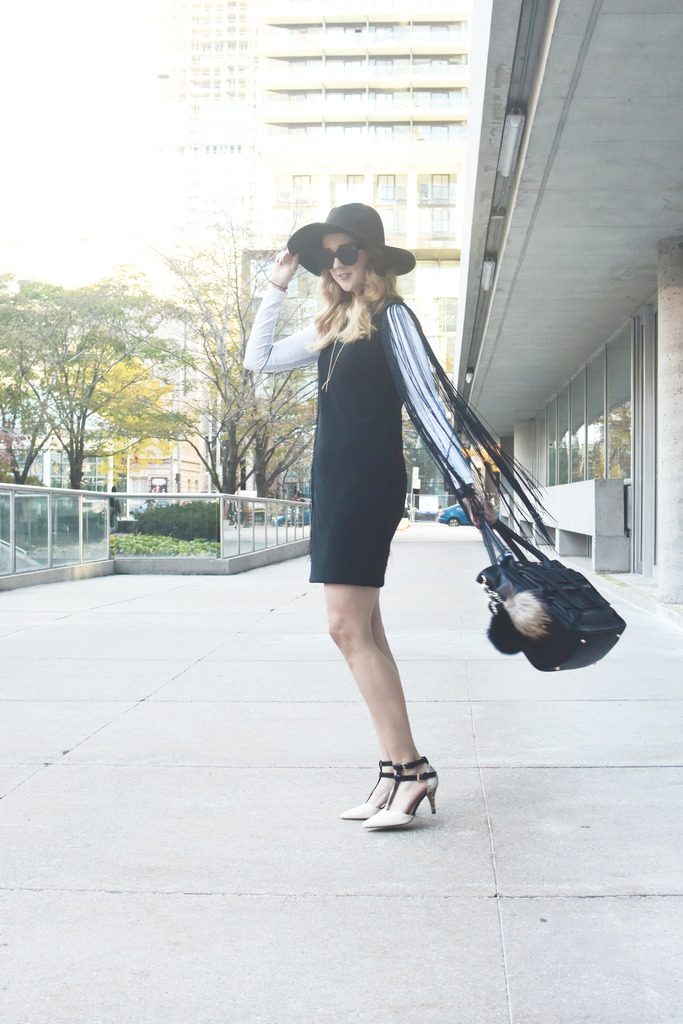 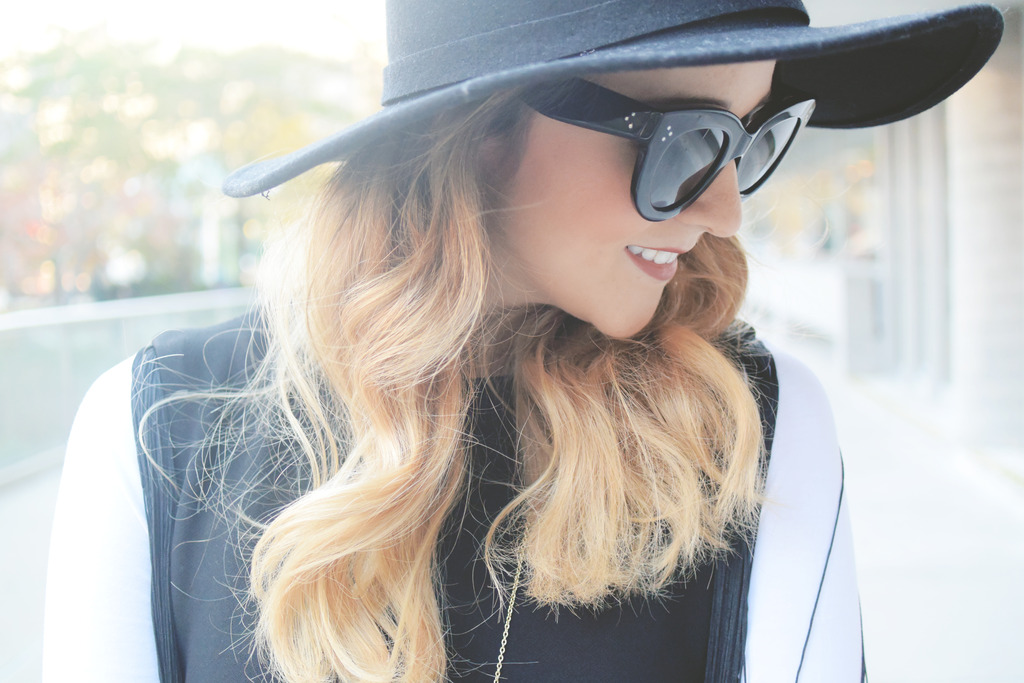 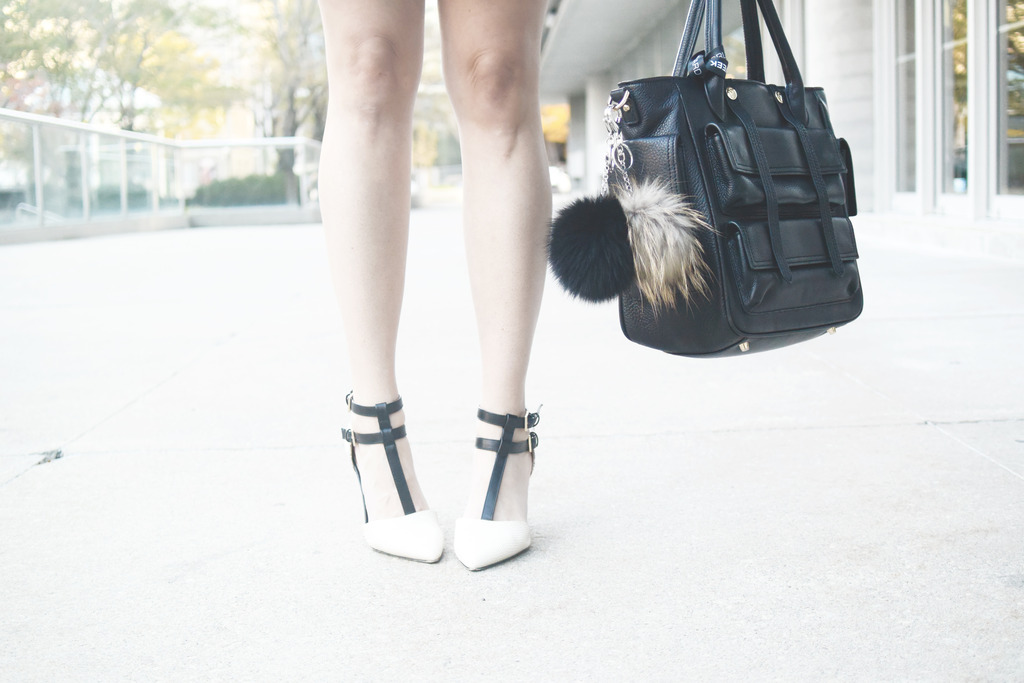 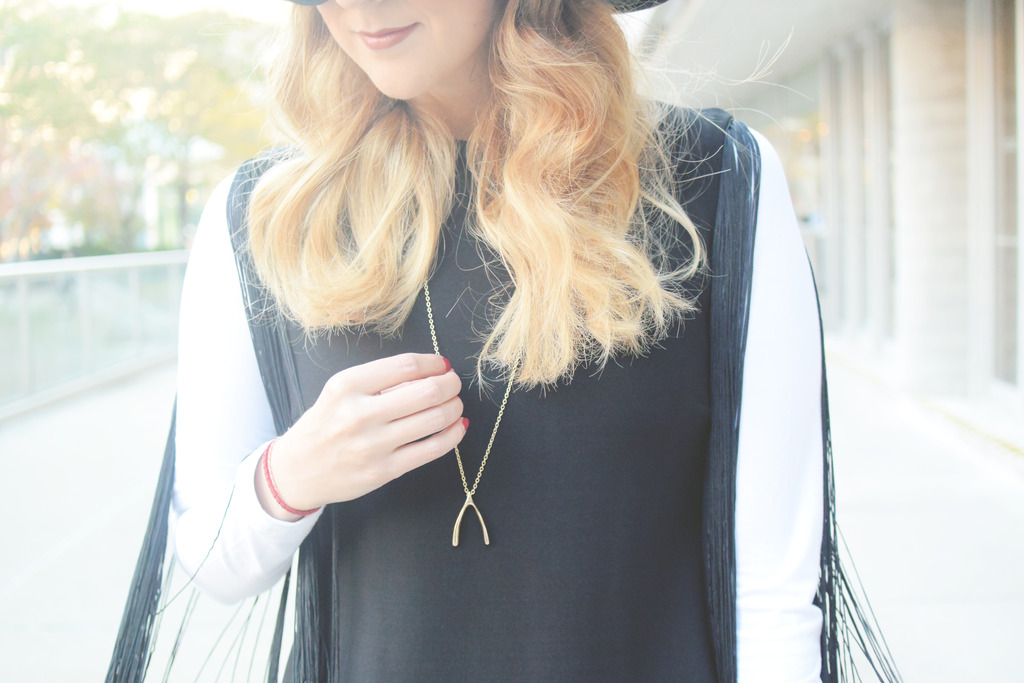 FEATURED ITEMS: Fringe Dress, Winners | Wishbone Necklace, c/o Beck and Boosh | Shoes, Khols | Hat, Joe Fresh | Bag, Sneha Varma | Pom poms (nicknamed Harold and Furina and they are going steady no less), c/o Envy Clothing Co | Long Sleeve Tee, H&M | Celine “Caty” Sunnies, c/o Smart Buy Glasses | Watch c/o Daniel Wellington | Photos c/o Denis Duquette |
Immediately after spotting this dress at my local Winners I knew I had to have it for fashion week, and with the winter season (i.e. party central) upon us I knew I would also get a lot of use out of it too (You might be surprised to know that I’m pretty practical when it comes to shopping you guys).
Simplistic in nature, this dress is essentially a LBD upgrade. It’s nothing too too crazy, but when you look closer it’s also a lot of fun. Because I wanted to wear this dress in October (in Toronto) I knew I needed to figure out something about it being sleeveless. Of course I didn’t want to cover up the fringe I mean duh! What would be the point if no one could see it?
So I decided to layer it over a long sleeved t-shirt. I contemplated adding a black long sleeved shirt to make it look like it was part of the dress, but I feared that the fringe would get lost in the darkness, so I decided on a white tee instead. Originally I wanted a white turtleneck, but do you think I could find a fitted one in early October? Heck no! It was like trying to find a needle in a haystack. Luckily the weather really cooperated for me on day 4 of fashion week because it was mildly warmer than usual, and I was totally fine! Thank you mother nature for sparing me.
When deciding on what shoes to wear I immediately thought of these black and white pumps with their snakeskin print, mostly because they are surprisingly very comfortable, but also because they matched PERFECTLY! I also want to point out that you could totally change this look by adding a pair of white sneakers to the look (so perfect for day).
If you’ve been following along with my looks for fashion week you might notice that I’m going through a bit of a black and white phase, and judging by the looks on the runway for Spring/Summer 2016 so are the Canadian designers. Buckle up and get comfortable guys because monochrome dressing is not going anywhere anytime soon.
To say this look was well received at fashion week would be an understatement! It was crazy how many people wanted to take my photo, or asked me where I got my dress! It feels good to know you did good especially among your fashion peers!
What do you think of the fringe trend blog reader? Would you wear it?
xx
Short Presents 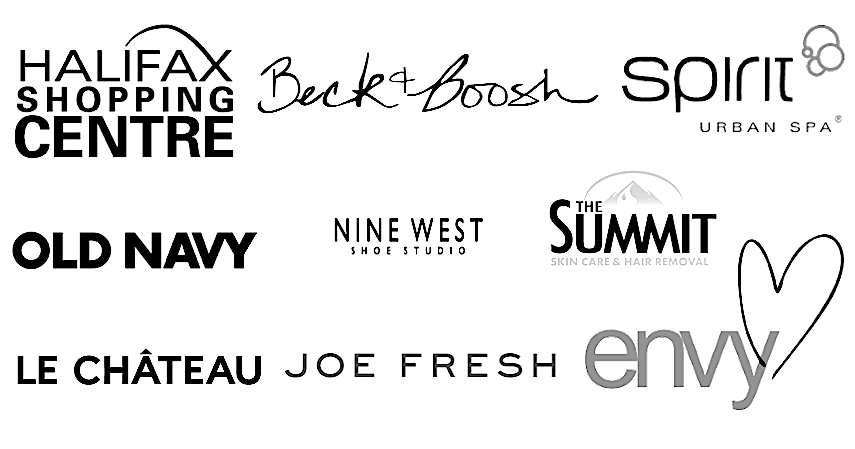 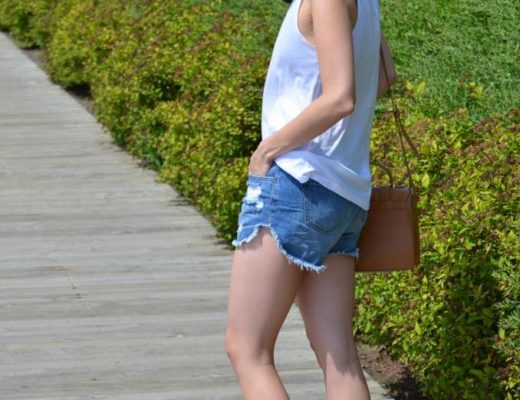 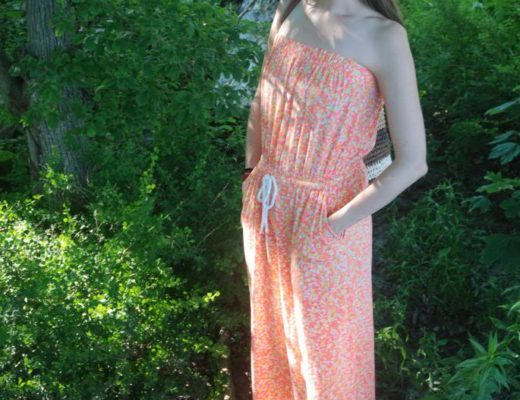