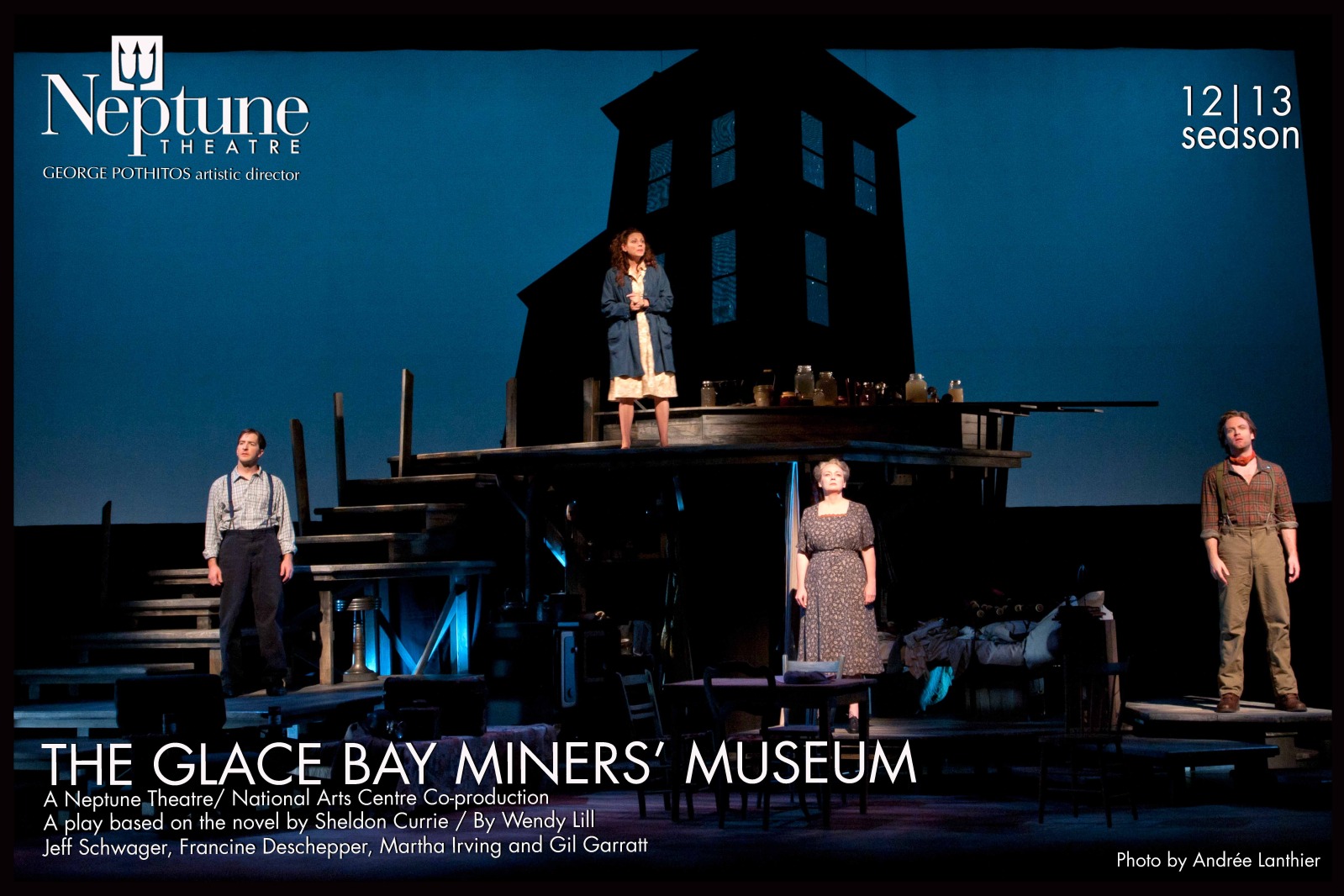 The Glace Bay Miners‘ Museum currently on at The Neptune Theatre was adapted for the stage by Wendy Lill from Sheldon Currie’s novel. On opening night (last Friday) I was invited to partake in the
fun.

Walking
into the Neptune Theatre patrons were welcomed by a man in a
kilt serenading guests with a traditional Cape Breton bagpipe tune. It
was a wonderful way to set a tone for the play, and also to fill Barrington Street with music on the busy Friday night

Set in the 1940s, The Glace Bay Miners’ Museum, is the story of Margaret (Margie)
MacNeil, whose father and brother died in a mine disaster, and also her
romance with musician Neil Currie. The play filled with wit and sass will make you laugh and cry, and laugh all over again.

Margie (Margaret MacNeil) the coal miner’s daughter played by actual New Waterford native Francine Deschepper was a feisty little comedic fire cracker. The audience couldn’t
help but laugh when she constantly wiped her snotty nose on her arm, or when she obnoxiously sniffed her nose mid-sentence.  Margie’s character has a bit of an
obnoxious charm about her, and you couldn’t help but love her even though she had a bit of potty mouth. Margie begins the play by delightfully explaining to the audience that she accidentally earned a reputation due to a misunderstanding with a boy when she was young, and because of her reoccurring sinus problems she was then dubbed a snot-nosed whore.


Margie soon stumbles upon Neil Currie (a drunk bag-pipe playing war vet) while at a local dinner. The two share tea and chips until Margie takes Neil home to meet her widowed mother (played by Martha Irving) her younger brother Ian (played by Jeff Schwager) and her grandfather (played by David
Francis) who hasn’t spoke a word since he was deemed “fit” to work despite his black lung and his constant need for a thump on the back every hour.

Grandpa played by David Francis, despite his actual absence from speaking still manages to leave a memorable mark on the show. His comedic timing could not have been better, with his shoe banging, and his constant writing in his notebook, he made everyone fall in love with him, and roar with laughter. He reminded me so much of my own grandfather who also worked in the coal mines in Cape Breton as a young lad and still has a flare for pranking my family members. Grandpa’s character represents both the past and future for Neil and Ian and all the men who continue to work in the coal mines.


Ian (Margie’s brother) values hard work and despite his fear for working in the mine he’s still optimistic about it, and even works towards developing positive changes for the union. Neil on the other hand values the music and culture of Cape Breton above all else, and doesn’t support men getting sick to earn a wage. Together the two represent the tension that was so rooted in Cape Breton culture. 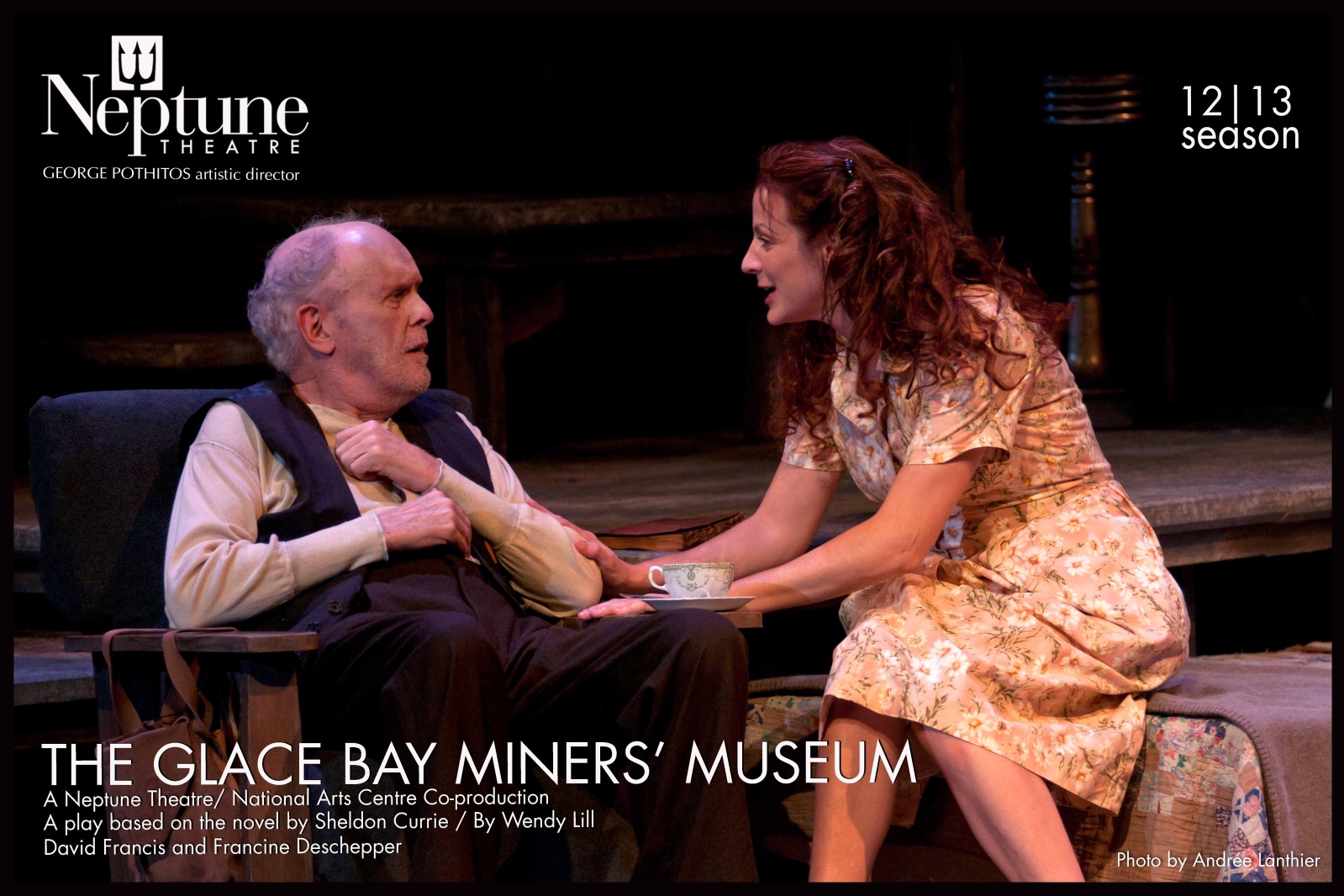 set is one that invites your imagination to blur with fiction, the
bottom level is quite cleverly a crowded two room shack built in protest
by Mr. MacNeil (Margaret’s father) who was too proud to take up living
in a company house while he was working in the mine. Then with the use
of properly lighting the above portion of the shack doubled as a cliff
(as seen in the photo below). I
loved the use of levels for this play, a plank like structure that
Margaret tended to speak from stuck out and made you both fearful and
enthusiastic
of what was going to happen next. I’ve seen many Neptune plays and I’m
always impressed with how they creatively use their stage space.

I thoroughly enjoyed the play from beginning to end. I literally laughed so hard I cried, as the lines were so carefully driven, and then so poignantly given. The first act of the play is one filled with wit, and sarcasm, but by the second act things turn more serious. It’s an emotional roller coaster for anyone from Cape Breton especially with a play so rooted in the island’s coal mining culture. There was, and is still, a substantial amount of hardship in Cape Breton both while men were working in the mines, and then again after they closed. What’s brilliant about Cape Bretoner’s is their constant resilience and strength to face these hardships with a tremendous amount of humor.

The Cape Breton accents and jokes were spot on for me – being a Cape Bretoner myself I almost felt like my family was on stage blabbering about. I felt both at home and yet still very entertained. This play reminds us how important it is to keep our culture alive whether through songs, stories, or even plays. The play reminds us that it is always important to remember, if you don’t know where you come from you don’t know anything. This play is truly a must-see for anyone both from the island and not, as it is important that these stories are both noted and remembered.